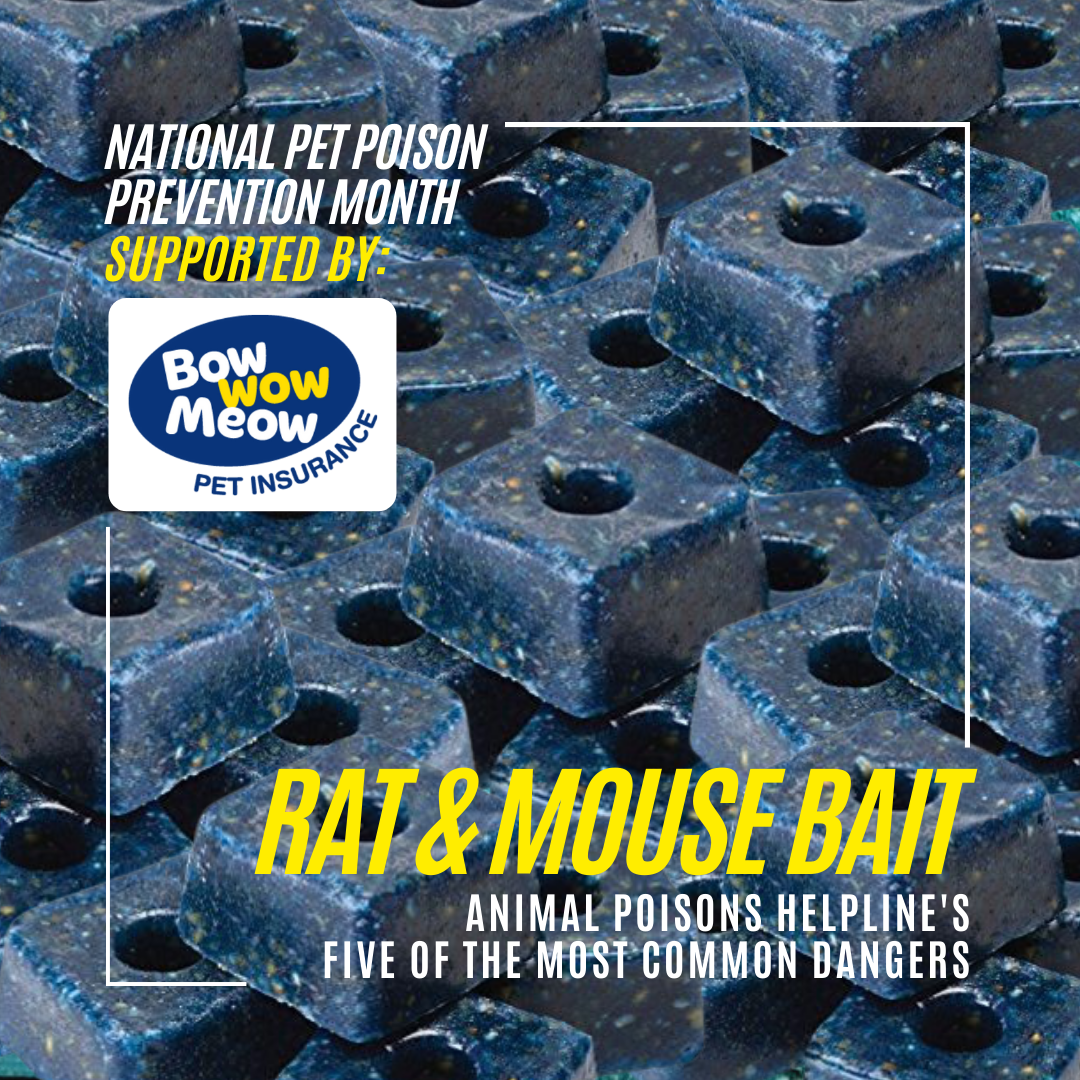 With a mouse plague running rampant over parts of eastern Australia, we would like to remind our followers about the risks of using rat and mouse baits around our pets and encourage safe use of these baits. The Animal Poisons Helpline receives many calls from distressed pet owners regarding the ingestion of such baits. Rodenticides were in fact the most common poison that pet owners phoned the Helpline for in 2020, and this month we have received a record number of calls about these baits.

The majority of rat and mouse baits used in Australia are anticoagulant rodenticides. These poisons affect rodents by preventing the activation of vitamin-K dependent coagulation factors. This essentially reduces the ability of the blood to clot, resulting in uncontrolled bleeding and subsequent death.

Unfortunately, pets that ingest these baits can also be at risk of bleeding, which can be life-threatening. Rodenticides are often formulated in grain-based baits which are purposed to attract rodents. Dogs are also attracted to grain-based baits and will often eat large quantities if given a chance to do so.

There are many different anticoagulant baits available for purchase in Australia and whilst some are considered safer than others, many of these baits can result in poisoning after the ingestion of small quantities. The onset of bleeding is typically delayed by several days, which may give pet owners a false sense of reassurance prior to the onset of life-threatening bleeding. According to our platinum sponsor Bow Wow Meow Pet Insurance, anticoagulant rodenticide claims accounted for approximately 12.6% of all poisoning related claims made in 2020 with an average claim value of $230 AUD*.

Prevention is always better than a cure. Where possible, reduce your use of anticoagulant rat baits and consider humane traps or alternative products such as salt based baits. If you must use an anticoagulant bait, consider using first generation baits (such as warfarin or coumatetralyl) which carry less risk of secondary poisoning. When using anticoagulant baits, only use as much as is necessary and ensure that they are removed when they are no longer required. Always ensure baits are secured and placed in areas that your pets cannot access.

Veterinary treatment of anticoagulant rodenticide poisoning can be lifesaving but may become costly in certain cases. Pet insurance provides peace of mind and protection in the event that your pet is ever poisoned. Our platinum sponsor Bow Wow Meow Pet Insurance are currently offering two months free pet insurance in the first year of coverage for Animal Poison Helpline followers. Visit bowwowinsurance.com.au/poisons to take advantage of this offer.

If your dog or cat has eaten or potentially eaten any rat or mouse bait, please phone the Animal Poisons Helpline on 1300 869 738 (AU) or 0800 869 738 (NZ) immediately, even if your pet looks well. We can assess your pet’s exposure to determine if they will be at risk of poisoning and if they require urgent veterinary assessment.For pet poison updates direct to your email box, sign up to our mailing list here.