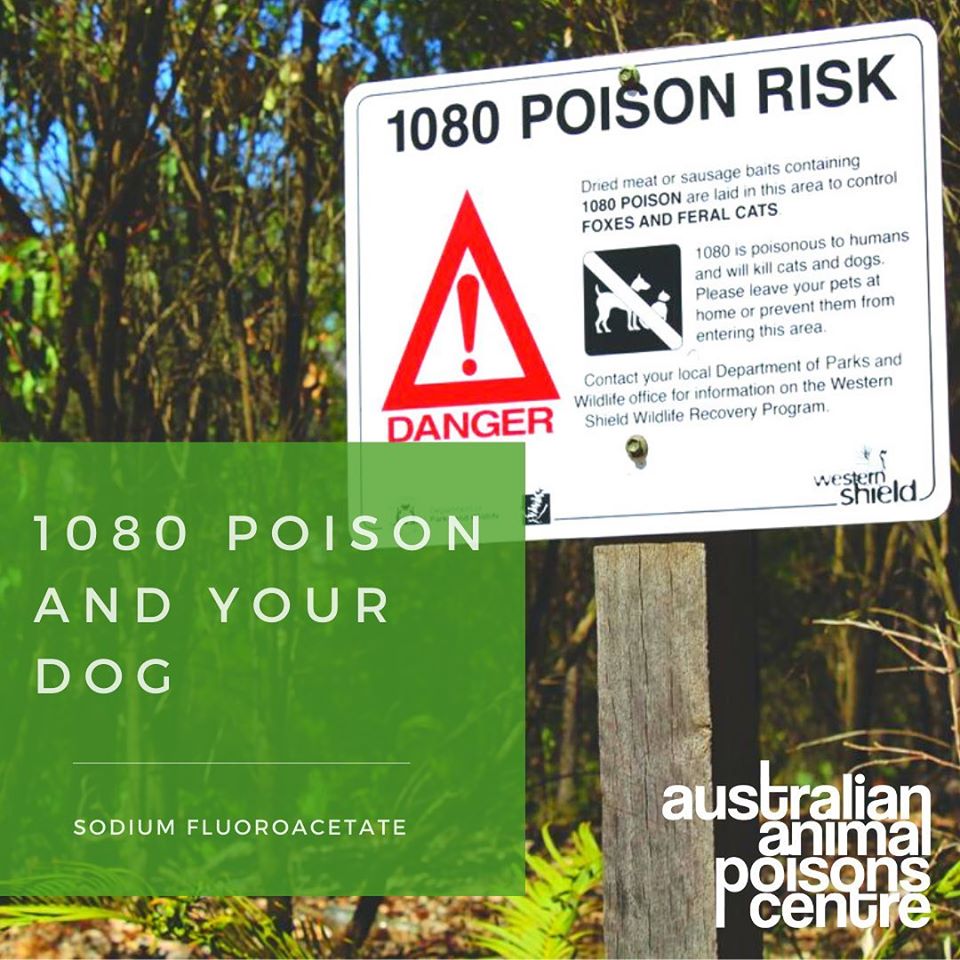 Posted at 10:23h in News by Animal Poisons Centre

Sodium fluoroacetate, commonly known as 1080, is a highly toxic pesticide that is used in certain areas in Australia to control introduced pest animals such as foxes, rabbits, cats, feral pigs and wild dogs. 1080 is a schedule 7 poison in Australia, which means you need to have a permit to procure and use it.

A similar compound, potassium fluoroacetate, naturally occurs in several native Australian plant species such as Acacia and Gastrolobium. As a result, some native animals have developed a degree of tolerance to the effects of 1080.

As 1080 has no antidote, prevention of poisoning is essential. 1080 baits can be highly appetizing to dogs. Pet dogs should be kept well away from areas where baits may be laid, these areas are usually clearly sign-posted. A muzzle can also assist in preventing dogs from eating baits or scavenging on carcasses that may be contaminated with trace amounts of 1080.

Signs of poisoning may be delayed from 2-20 hours and include;

1080 has attracted significant attention from animal welfare groups and media in Australia and New Zealand. This is primarily due to the prolonged suffering that it can cause to poisoned animals prior to their death and the unselective nature of 1080 in killing non-target species. Unfortunately, dogs that being to show neurological signs of toxicity (such as agitation and convulsions) have a very poor prognosis.

Newer 1080 alternatives such as para-aminopropiophenone (PAPP) may be more humane as they result in a faster death. PAPP also has an antidote which can be used in cases of accidental poisoning. Development of these newer poisons has allowed substitution in some areas. Unfortunately, PAPP baits must be buried to reduce risk to native animals such as birds, therefore aerial baiting programs continue to use 1080.

If you know or suspect your dog has been exposed to a 1080 bait, poisoned carcass or contaminated vomit, immediate action is needed. Take your dog to your nearest veterinarian as soon as possible, do not to wait until symptoms occur.

If there will be a delay in getting your dog to a veterinarian clinic, call the Animal Poisons Centre or nearest veterinarian for advice which may include a recommendation to induce vomiting before arriving at a vet. Be aware that inducing vomiting is associated with significant risks in itself and the merits of doing this will be assessed on a case by case basis.